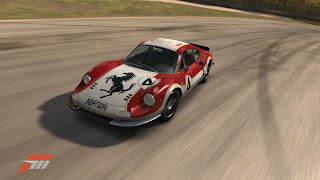 Yeah, I'll be away from blogging for a few weeks. I have vacation next week, and some personal projects that are being worked one! When I return there will be new reviews, a great give away and project updates!
Posted by Mitch at 9/30/2009 02:32:00 AM 2 comments:

Now my Friend Matthew over at MiniWarGaming is having a sale, but not any sale! It's a 20% off all GW products! Since its in Canadian funds, our pals south of the border stand to save allot! If your interested, you can check them out here and see Dave himself explain this sale further!

Hey guys, Fox here from Eldar Tactics. I found this thought this was a fantastic idea. Picture this your sitting around talking to friends about war gaming, painting, modeling and what not from the comfort of your home and your friends are all over the world! Cool huh. Thanks to Catattafish, if you have Ventrilo there is a world wide war gaming voice chat, don't have it no worries follow this Ventrilo Download link and join up. Server info is below.
toronto.maxfrag.net
3826
Posted by Fox at 9/23/2009 11:33:00 PM No comments:

Today I will be providing a review of some work I had commissioned out.
I contacted a friend of mine Jason to create some Salamander themed accessories for my army I am currently rebuilding. You can reach him HERE if your interested in hiring him.
The first part of the project is scaled shoulder pads for my Sargent's. My theme will be that to become a squad leader, the marine in question has to find and kill his own Fire Drake to prove his worth. They turned out really well and very reptile looking. These is also two sets with a hanging cloth with more scales on it. This will be for my more veteran Sargent's, which will be a single assault and tactical marine.
The second part of this project was the cloak for the Captain of the company! His cloak was done in a similar way as Champlain Xavier is done. Jason was very skillful in his attention to detail, and he even added spines!
I would definitely recommend his services for anyone looking for custom greenstuff sculpting! You can also find some more examples of his work over HERE 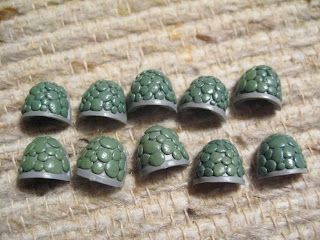 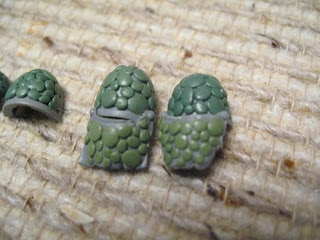 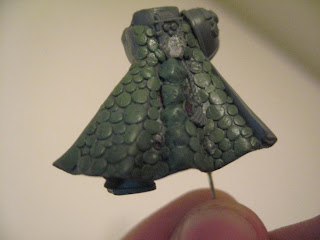 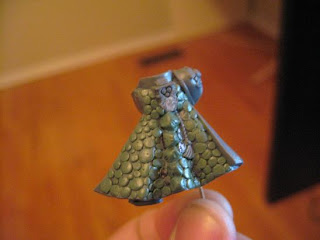 Looks like #7 woroxon's email was misplaced! He acknowledged winning at http://wargt.blogspot.com/ yesterday! Sorry guys! Stay tuned this week for a few great resin products which I will be reviewing and giving away!

Below is a picture of two of my cats sitting on my monitor! 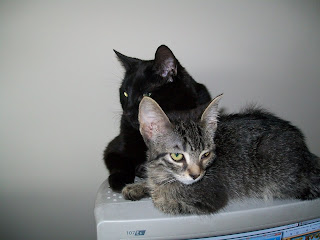 I built this Airfix 1:76 Scale kit last week, and painted it up tonight. Its a demo used for an upcoming project and is from my personal collection. I used Tamiya panzer grey as the base coat, with a Mig tan filter and Mig Brown wash. For weathering, I used a sepia and ochre pigment powder from vallejo using acrylic medium. It turned out alright considering the tank is less then two inches long! I didn't do any fancy detail work since airfix kits really lack the detail you'd find on a Revell or PST kit. In the end it was an easy to assemble kit and I recommend it since the price was $6.00 Canadian. 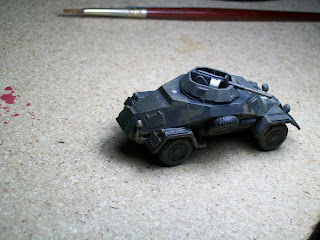 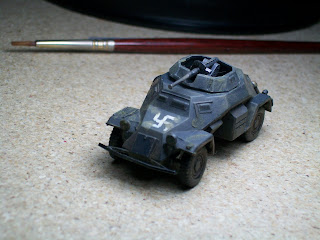 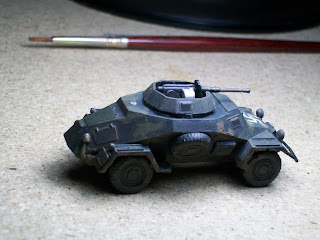 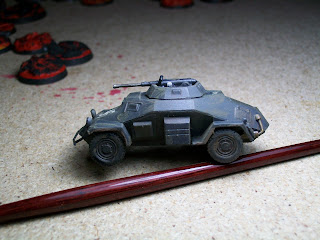 The Leichter Panzerspähwagen (German: roughly "Light Armoured
Reconnaissance Vehicle") were a series of light four-wheel drive armoured cars
produced by Nazi Germany from 1935 to 1944.
They were developed by Eisenwerk Weserhütte of Bad Oeynhausen.
Chassis were built by Auto Union in Zwickau and assembled by F. Schichau
of Elbing and Maschinenfabrik Niedersachsen in Hanover-Linden.
It used the standard sPkw I Horch 801 (heavy car) chassis with an angled armoured body and turret. The rear mounted engine was a 67 kW (90 hp) Horch 3.5 petrol engine, giving it a road speed of 80 km/h (50 mph) and a cross-country speed
of 40 km/h. It had a maximum range of 300 km. Used by the reconnaissance battalions (Aufklärungs-Abteilung) of the Panzer divisions, the type performed well enough in countries with good road networks, like those in Western Europe. However, on the Eastern Front and North Africa, this class of vehicle was hampered by its relatively poor off-road performance. In those theaters, it gradually
found itself replaced in the reconnaissance role by the Sdkfz 250
half-track. The Sdkfz 250/9 was the Sdkfz 250 with the same turret as the
Sdfkz 222. The Sdkfz 222 was examined by Soviet designers before they
created the similar BA-64 light armoured car. Front and sides were made
of 8 mm (0 in) steel; thinner 5 mm (0 in) plates protected the top, rear,
and bottom. Cast vision ports later replaced ports cut into the armour. The
open topped turret was fitted with wire mesh anti-grenade screens. This version of the vehicle was armed with a 2 cm KwK 30 L/55 autocannon and a 7.92 mm MG34
machine gun.
As you can see, this would be a great vehicle to a commanders vehicle pool!
... Mitch
Posted by Mitch at 9/12/2009 11:46:00 PM No comments:

Email ThisBlogThis!Share to TwitterShare to FacebookShare to Pinterest
Labels: hobby

Giveaway #4 and The Painting Corps

You should check out the new Contest Calender found here which has been made possible by The Painting Corps. This should help people find contests and other promotions being offered in the gaming community!


To celebrate this new tool, I will be doing a small giveaway of the following: 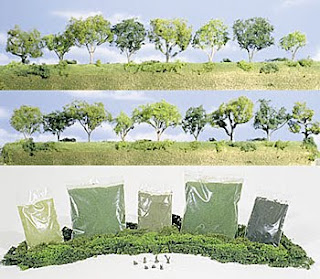 As before, in order to qualify for the giveaway you must post a comment on this post and become a follower of The Ottawa Gamer. I also recommend you visit Woodland Scenics and checkout there great products! There will be a step-by-step review of there Rock Faces, Landscaping, River/Waterfall and Scenery Details kits in the near future. The draw will take place on Thursday the 17th at 23:00 EST!

90% of the models are stripped bare metal, assembled, or primed.

Up for sale is the following: (links are for reference, not my pictures)

Also comes with the current and previous edition of the codex, a 7th edition WHFB rulebook, and all the movement trays needed for the above force.

Asking $350 obo. You can email me offers

Today I will be reviewing resin bases which I received from Daemonscape. They arrived undamaged in a small box, packed nicely. They are made from a medium weight resin which looks to hold detail well. They are caste very cleanly and need a small amount of cleanup to be ready for priming.


Out of all the sculpts, I really like the swamp style bases. I will be painting them up to look like a magma field which should look great. I'll post a picture up later this month.


The rest of the sculpts are the quality you'd expect from this style of bases. Overall I think there great sculpts and there quality is very high considering there bargain price! I give these bases an overall score of 8.5 out of 10. Expect a review of there battle base in an upcoming post! 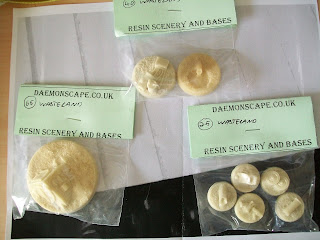 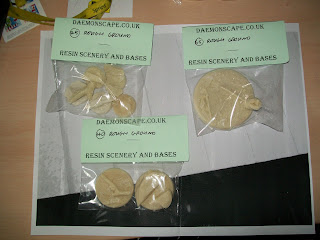 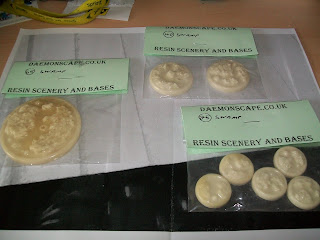 Yeah, I bought it at Fandom II for $113, which is a nice discount considering everyone I know paid $119. The box is very heavy and of good construction.
The rulebook is a little flimsy and may not last very long with heavy gaming. The terrain tiles are the thickest cardboard if ever seen for gaming, and might be thinking then furniture you buy at Ikea, LOL! The cardboard has been impressed with raised detail which makes it worth it for sure!
The miniatures are really nice sculpts, and they did a wonderful job considering these are "snap together" models. The terminators are a red plastic which seems a little more brittle then grey plastic. I can see a few weak spots on the miniatures which will wear out or damage easily. The Captain with powerswords has "hanging bits" on his cape, the backpack iron halo bits, lightning claw armed terminator and the hanging "drip" icons all seem prone to damage.
The Genestealers look to be much more durable, minus the claws and pointy bits. The "classic" pose of Genestealers are really nice and stable on the bases provided. The Broodlord is great, and I can see alot of people using him in there normal 40k armies. The only downside, is the provided bases on the wall crawling style of Genestealers. There very unstable and are larger then the 25mm squares of the board. I may end up buying a box of normal Genestealers to replace them and using the wall crawlers for a diorama, etc.
In the end, its a great purchase and as an added bonus, my Fiance actually likes the game! Its a miracle, since its the only miniature/war/sci-fi/fantasy/historical game she has ever tried and liked!! 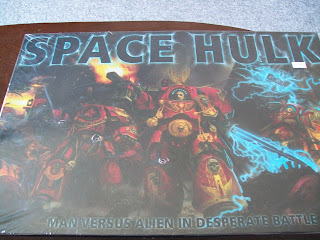 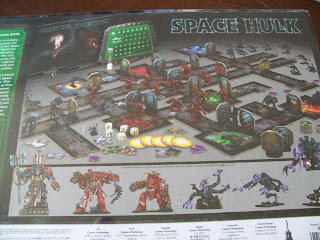 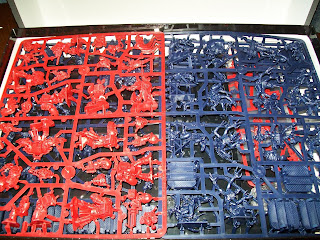 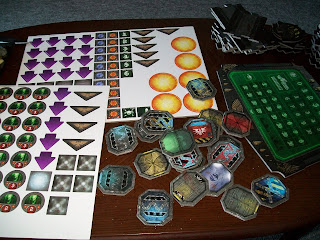 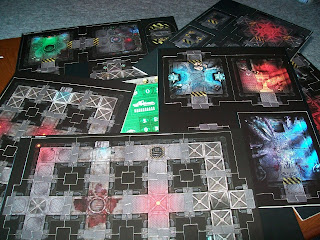 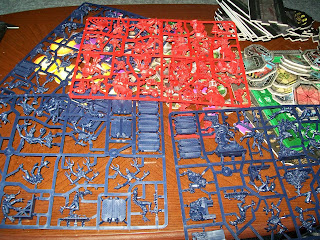 Email ThisBlogThis!Share to TwitterShare to FacebookShare to Pinterest
Labels: 40k

Ah, the Game Summit Summer 2009 has came and gone this last weekend!

I did attend both days, with a different goal this time. Normally I play the tournaments, but this time I took in all the little side events. The event was at the Nepean Sportsplex which is an alright venue. They had food avail but it wasn't tasty at all, and Greg actually throw out the Pizza he bought from them, lol!
The first event which I went to was the miniature painting clinic . For $2 you are given a space marine, which had sprue, flash and mold lines still attached and have access to about 80 reaper paints. I spent a good portion of an hour just messing around painting the marine really randomly for my Friends kids, since they get a kick out of this stuff. The on site staff for the painting area really didn't do much, he handed me a marine and walked away. Its not really a problem for me since I know how to paint in the end. Below is what I painted, yes its totally random but his twins will love it! lol 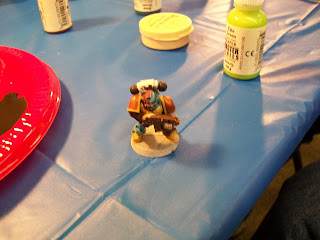 And the winner is..